It's almost the end of the Ben 10 fortnight and today I'm opening not just a figure, but it also has a "vehicle" as well.  It's Big Chill's turn at the spotlight for Monster October here, and I can't wait to get this going.  Big Chill was one of the more used Aliens (no Lemonjuice, not that way) of Alien Force - there was even an entire episode that centred on him.  He's a ghostly sort of figure and powers include flight, intangibility, invisibility and a frost breath. 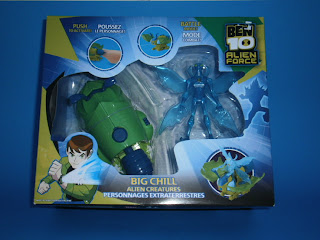 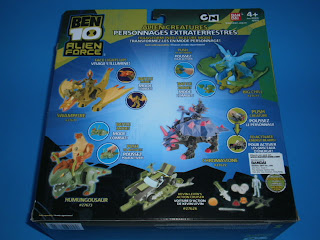 The box has all sorts of Alien Force going for it, including the green and blue colours and the starburst.  The front has a nice cut out window through which the figure and the vehicle can be seen, while the back shows the other vehicles in the series.  This box looks a lot better than the card. 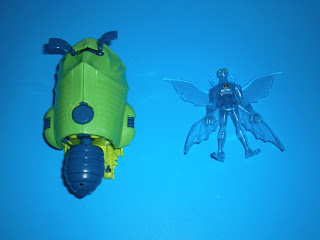 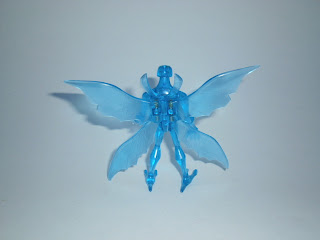 There's only 2 pieces out of such a big box, and since it's one of Ben's aliens, it doesn't come with any accessories at all.  No siree.  The figure, is moulded from clear blue plastic, probably to differientiate it from its normal coloured figure, but probably also to cut cost.  This version of the figure presumably represents the intangible aspect of Big Chill.  The sculpt works and there's some details, but there isn't anything spectacular about it.  Big chill has the usual 7 points of articulation plus two more on his back for the wings to make 9. 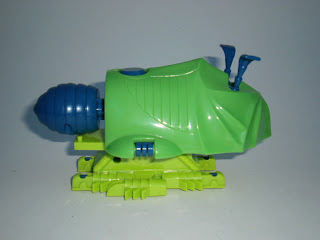 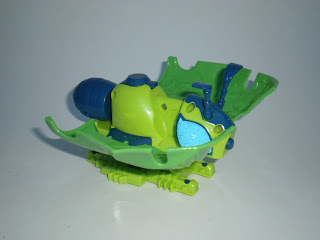 The vehicle has two modes, a phallic caterpiller mode and a butterfly vehicle mode.  There on ly spot of paint goes on the eyes of the vehicle, and that's adequately done with minimal sloppiness.  There's an action feature built into this vehicle - there's a hole for filling with water and when the tail is pressed (something I'm sure Lemonjuice would like... wait a minute, I'm not writing for Hobotastic...), water squirts out from the front of the head. 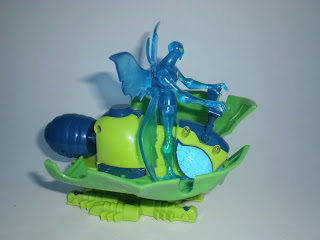 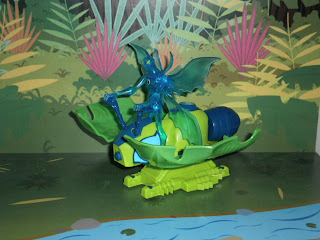 The figure fits rather well on the vehicle, when it is in Butterfly mode.  There are built-in wheels on the base of the vehicle, but besides that and the wings and the water-squirting feature, there isn't much to write about.  (Oh and 3B, I know this is insect themed, and it should really go on your blog as a guest spot, but since I've already done Stinkfly last week, I didn't want to do another one just in case Lemonjuice gets all bitchy and jealous and all... just saying... he can be overly... possessive sometimes...). 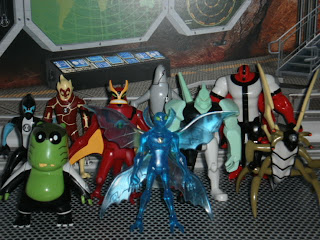 And tada, that's all my Ben 10 aliens to date.  It's a motley crew and it seems rather disparate to the point that they seem to be from different lines, from the Pokemon-like Upchuck to the Strongbad Jet Ray.  I was gonna display them, but they don't look that great, so it's back into the box for them after tomorrow, which is the last day of Ben 10 fortnight, and I've saved the best for last!
Posted by Novelty at 00:07