We are still on the first series of Ben 10 toys as we power through the second week of Ben 10 fortnight.  It's part of Toy a Day's Monster October, and today's figure is the robotic bounty hunter known as Six Six, or Sixsix or 66. 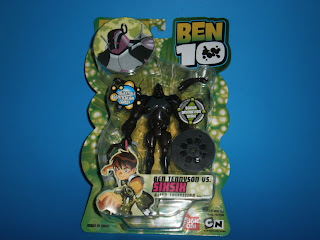 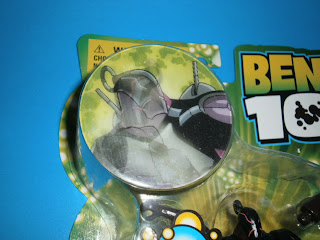 Six6 comes on the standard Series 1 card, yadda yadda.  I've written so many times about it in the past two weeks that it's almost lame.  Again, it would have been good if they change the title card image from Ben to 6six, but other than that, the card is all good. 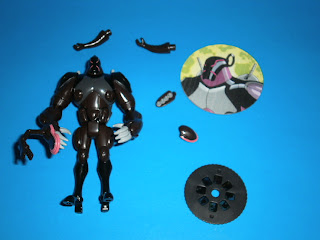 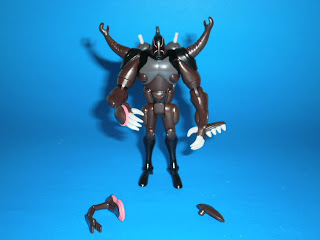 There are a lot of pieces out of the package, so much so that it doesn't even seem as if it's a Ben 10 toy.  There's the usual lenticular pog and the viewmaster reel, but there's also a lot of spare parts, and by parts I mean limbs.  These plug securely into holes on the body sculpt.  The sculpt is detailed, and gives the figure a very mean look.  There are the usual number of articulations, including two on the upper arms. 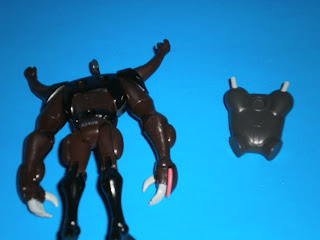 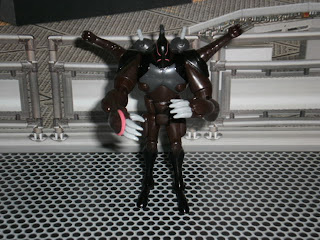 The backpack is removable, which is a nice surprise.  There are also bits to change out on the wrists, including a pop-up missile launcher and a third robotic arm.  Tres cool!  It's almost as if this was a Japanese Revoltech figure.  Almost. 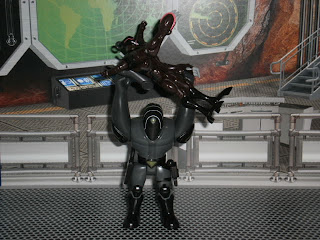 This has been the surprise figure of the line that I've opened so far, and by surprise, I mean it in a good way.  I like the detailing, the articulation and the amount of accessories included with the figure.
Posted by Novelty at 01:08