I've been having so much fun opening Lego sets this month (Yay!) which is such a huge difference from the usual action figure openings, yet so similar.  So I thought that in getting ready for the run-in to Animated August next month, here's one from Ben 10... Lego wise, that is. 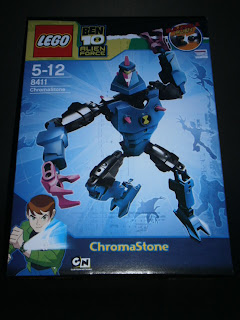 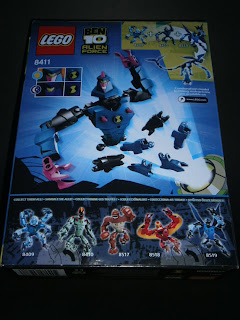 The box looks slightly different for Lego.  Sure, there's the Ben 10 Alien Force logo and a picture Ben is splashed on the cover of the box, with a photo of the actual toy (as opposed to a drawing).  The back of the box shows that this is in reality a construction toy, and how it can be combined with the other sets to form new monsters.  The bottom of the back of the box shows the other 5 sets of the theme.  Oh and there's this window with the sun and the moon... does it mean that it glows in the dark??? 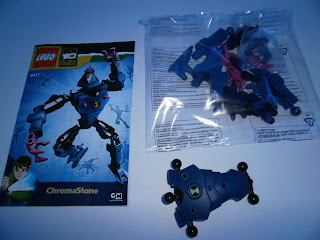 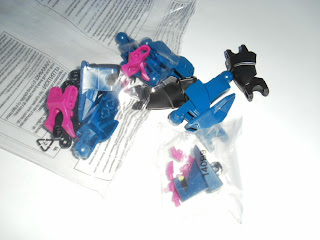 There's not a lot of pieces in this set so I wasn't surprised when I opened the box and only one medium sized baggie fell out.  There's also the torso and the instruction booklet.  Inside the baggie though, is another baggie with the head and the horns.  I like that they kept the head separate from the other body parts.  I thought the horns were the normal horn pieces, but apparently this is a new horn piece with a hexagonal design.  I was also surprised by the shade of the magenta - I think that's the first time I've seen that shade in a Lego set. 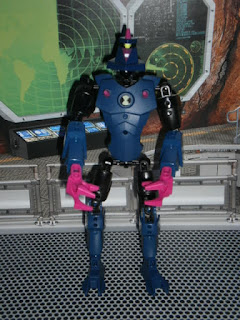 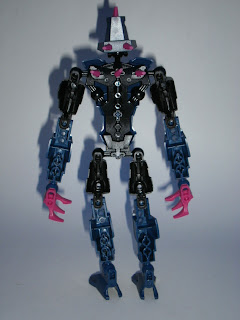 The figure was easy to build - snap all the limbs together, put in the horns and voila!  It looks more refined than a Bionicle figure and I like the overall look despite the fact that it's constructed together. 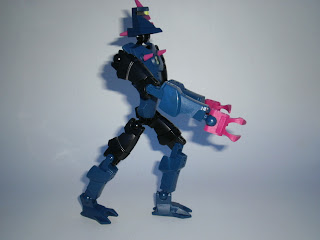 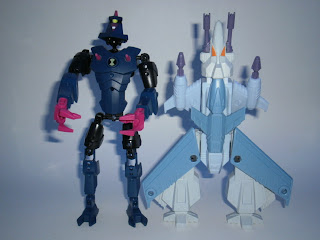 Now, being constructed from bricks, this figure has tons of articulation.  And being constructed from bricks with hinged ball joints most everywhere, he can be posed in a multitude of ways - kneeling, playing hopscotch, whatever.  And despite the fact that this is Lego, Chromastone is actually taller (slightly) than Doom Drones Strafer from yesterday, and definitely taller than DCUC Darkseid.

I wasn't very keen when I bought these and they sat around for ages, but now that I've built my first one, well, I think I do really like them a lot, and thanks to the gitd feature (if it works), these will have to go on my gitd shelf!
Posted by Novelty at 15:33