I got this toy because of the butterfly in the corner.  It caught my eye as I was walking past the Strawberry Shortcake aisle.  I have no idea why I like the butterfly though.  I guess the huge transparent windows on the packaging really works to promote the toy and increase sales. 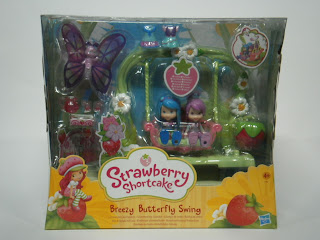 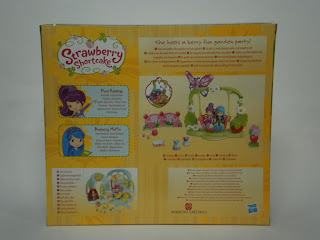 The box has all the usual elements expected.  The huge window is nice, and it does seem to be very crowded in the window, which is good.  The back doesn't seem as empty as usual either.  Perhaps this is the European package or something with the multilingual text. 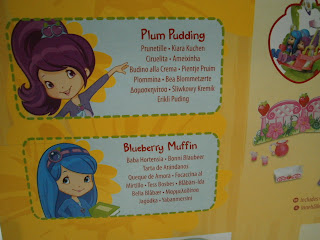 I'd like to point out that there aren't any bios on the packaging, only their names in about a dozen languages, and there's a nice picture of the toy, although there aren't acny action features that are obvious. 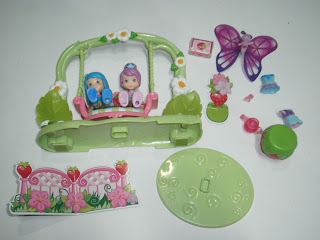 The box contains a lot of stuff including a paper tray and two paper backdrops.  Those paper backdrops are very nicely printed and adds detail to the toy.  It also cheaply bulks up the toy and makes the packaging seems more "busy".  There's the aforementioned butterfly with the transparent wings.  There's no articulation on that and it can't stand on its own because of the wings, but there is a hole at the bottom to allow it to be plugged into the swings set.  The swingset sits one or two and looks good despite its simple design.  It does have a removable base for added stability.  There's also a stawberry table, a pitcher and two tiny tiny glasses. 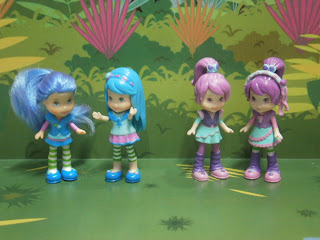 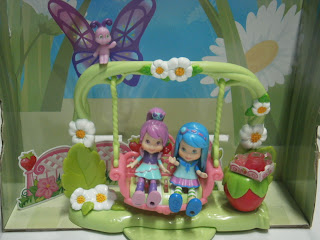 The figures are basically the same as any other versions of Plum Pudding and Blueberry Muffin - the only differences is that they have different dresses.  The paintwork is good on my figures and despite the recolour blandness, I think they look different enough from the counterparts of the same figures that I have which works for me. 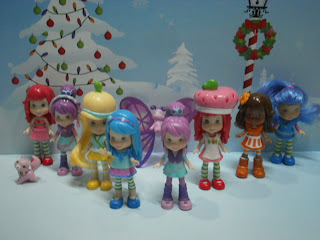 The new cartoon only has 7 characters in Berry Bitty City.  Well, my collection has just exceeded this number of figures!
Posted by Novelty at 12:48