This the the third Friends set that I have got so far.  Unlike the other two sets, which I got to be used to furnish my modular houses, I got this set for the great looking front.  It doesn't have a back or a roof though, and I'm not sure if it will fit into my city streetscape, but well, lets rip her open and find out. 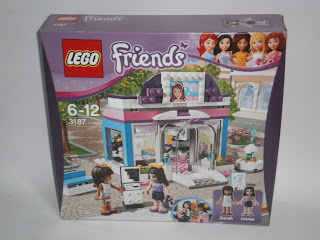 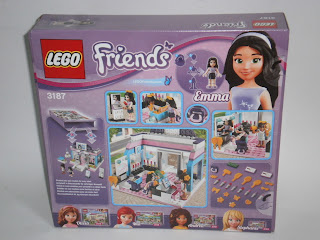 The box has weird angled planes on the sides which makes it seems fatter than it really is.  The front has a nice picture of the model while the back shows off all the goodness inside, as well as the other 4 "friends" in a line at the bottom.  I like the design of the box overall.  It's Lego, but also has all the norms one would expect from a toyline. 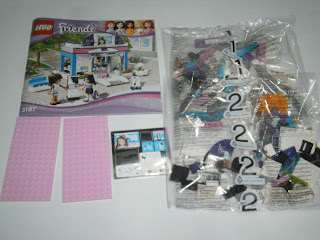 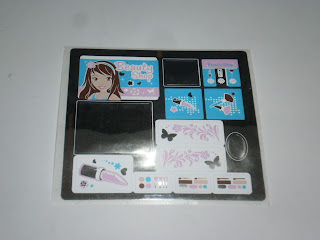 The box contains two baggies, an instruction booklet, two large plates and a decal sheet.  The decal sheet is printed on foil, which means every sticker is reflective and shiny.  Yay! 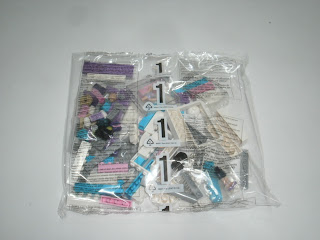 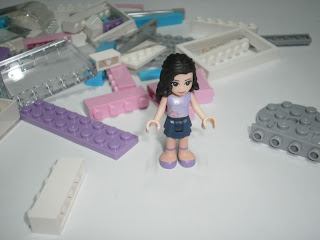 Baggie number 1 starts off with the figure.  I still think they look like Polly Pockets, but enlarged slightly.  There's only 4 points of articulation as usual. 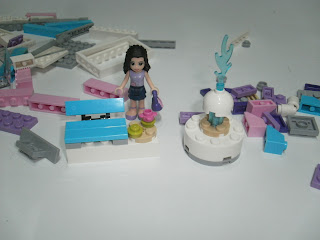 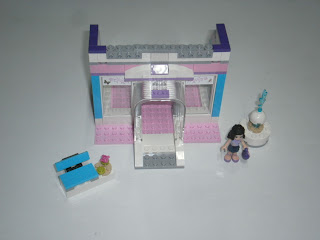 Baggie number 1 also builds a chair and a fountain for the exterior and the shell of the building.  The chair is interesting though, as although the figures could be placed in a sitting position on it, their legs jut out straight as there are no knee joints on the figures. 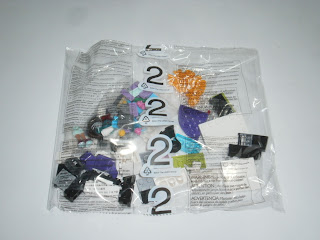 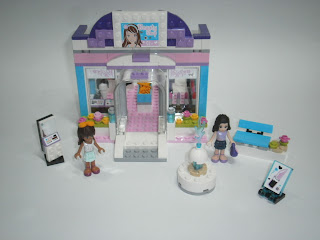 Baggie number 2 contains another figure and completes the shop.  There is a billboard and a make-up kiosk outside the shop.  I like the use of the foil sticker as the mirror on the kiosk. 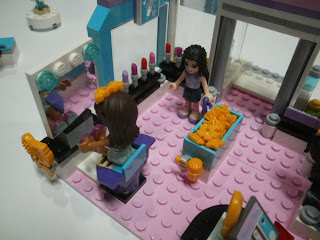 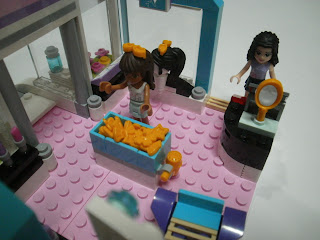 The interiors is choke-full of "stuff", from a whole box of hair accessories to a hairdressing station.  There's also a cash register.

Now, my main issue is that this doesn't have a roof, and it doesn't have walls for the rear area of the shop.  However, since this is Lego, and since there are two plates for the base, I could rip one of them out to be converted into the roof and rearrange everything else so that it fits the walls of the shop.  That sounds easier than it is in reality. 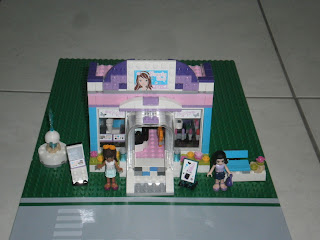 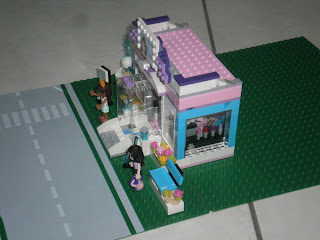 After a few trips to my parts bin, I did manage to accomplish what I set out to do.  Now, because some of the base has gone to become the roof, I've got to fill up part of the entryway.  Thanks to the modular buildings with their extra bricks, I decored the entryway in a nice tile pattern to cover up the gaping hole from the removal of the flor. 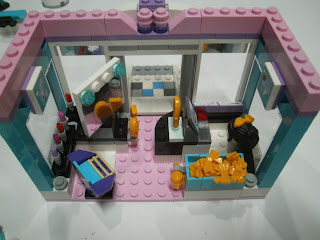 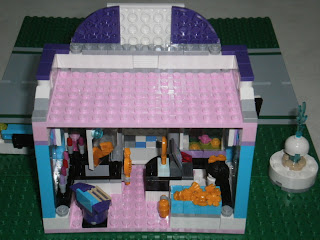 The walls also needed some "straightening" so that they rise up flush to the roof.  Again, all I simply had to do was to move some of the bricks around - although the pink bricks was tricky, but I managed to do that by hiding the slopes behind the entryway arch.  The interior also required some fiddling to get everything to fit, and the result was a lot more cramped than the original shop, but that's only to be expected.  Overall, I like how it looks and I think it will fit in better with my City streetscape.

However, it's a lot of work to convert it so and I doubt I could do it for the other buildings in the theme.  I wish Lego would just make this part of the City theme sorta like how Trains is now part of the City theme - a dedicated Friends subtheme wouldn't be that bad if it could be mixed in with the rest of the city sets.
Posted by Novelty at 14:59