It's still Females February.  I can't seem to find a catchy name to call it this year since I've used Femme Fatale February last year.  And the month is usually a female-centric month.  Well, one out of twelve months isn't very gender-equal, but hey, I don't run the industry - there aren't that many female action figures, which is a sad fact of the industry.  Anyways... 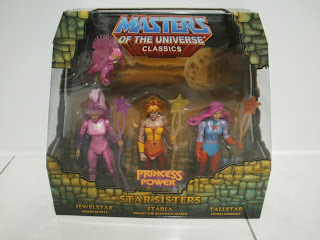 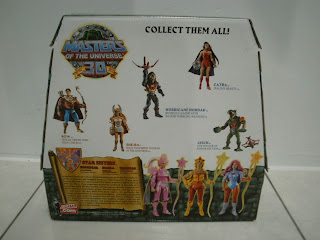 The Star Sisters is the first (three) figures, or oversized beast (depending on how one would like to look at it) that kicks off the 30th anniversary of the entire Masters of the Universe franchise.  Wait, but these are unproduced figures from the Princess of Power series.  Urm... look, three figures in one box!  The box seems way too oversized for the three figures though, and there's a lot of empty space inside.  It does show the background of the inner tray nicely, but it's still a waste of space.  The back has the combined bio of the Star Sisters and some of the Princess of Power figures including Hordak.  Again, because of the size of the box, it seems rather blank there as well. 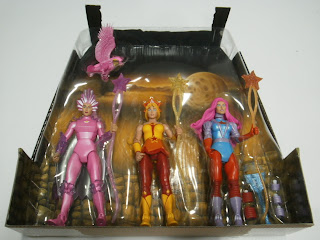 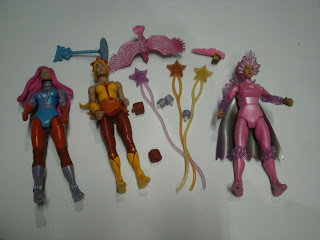 There isn't much in such a large box.  The only thing that's hidden by the box packaging are Tallstar's extensions and Glorybird's stand.  Otherwise, each figure comes with a staff and glorybird has a headdress as well as the aforementioned stand. 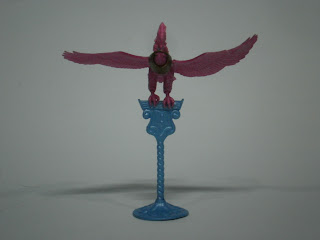 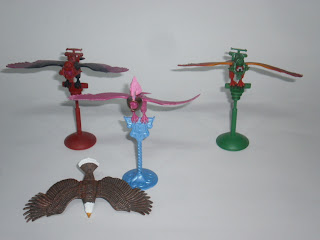 Glorybird is actually a repainted Zoar and is magenta in colour.  She looks different than the other birds thanks to the headdress which gives him a mane.  The stand is also an all new piece.  It's light blue and seems pearlised and looks nice in contrast to the purple and pink of the actual bird.  Glorybird has four points of articulation - twists ankles and flapping wings. 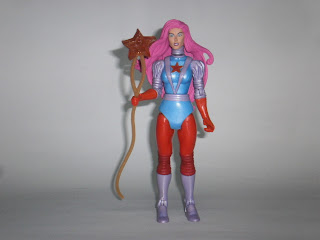 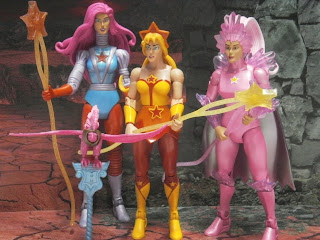 Tallstar has pink hair, a blue top with lavendar sleeves, dark orange legging and gloves and lavendar boots.  She must have dressed in the dark.  Her colour scheme is horrible.  Her neck flew off as I was taking her out of the box.  The joint between her neck and the body on my figure is very loose.  Thankfully the joints on the limbs are servicable and tight enough.  She does come with an action feature - her limbs and neck can be extended by snapping on extra pieces.  It seems like a good action feature on paper, but the reality is that this makes the joints rather loose and she falls apart during play.  Arms-Fall-Off Boy, here's your Limbs-and-Head-Fall-Off Princess (of Power)! 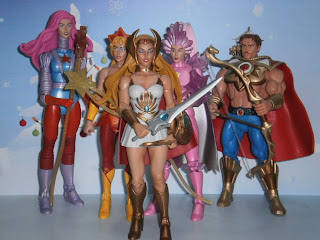 There is something wrong with her hip piece, such that her legs seems to start not from her hips but from her groin.  It makes her look rather weird.  Her face sculpt is okay - I'm grateful mine doesn't have splotches of paint.  Her hair sculpt also ensures that she has ample neck movement, but her head falls off anyways on my figure, so it just doesn't work. 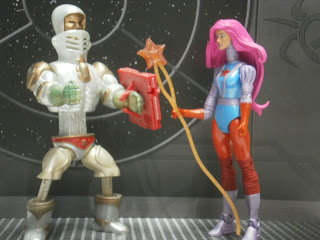 I should have been more happy that I was getting Tallstar to pair up with Extendar.  Yet this figure seems to be a letdown.  In fact all the Star Sisters seems to be a huge let down.  Do they even look amazing?  No.  They seem to be freaks to me... as each one of them has a huge negative in my book.  For Tallstar, it's her colour palette; for Jewelstar, it's her breadbox boobs and the carnivale wannabe crystals; for Starla, the jokey tiara and the star-spangled everywhere.  Which makes Glorybird my favourite character in the box... and that's just sad.
Posted by Novelty at 23:52