#744 of Year 3 My Little Pony Feathermay

Last year I opened Rainbow Dash and thought it was OK.  Fast forward to Christmas when the ponies were on sale and I was walking past the aisle because, well, it's the part of least resistance (in more than one sense of that phrase).  Feathermay apparently fell into the shopping basket (although that's disputed).  So here I am opening another Pony.  Good things come in twos? 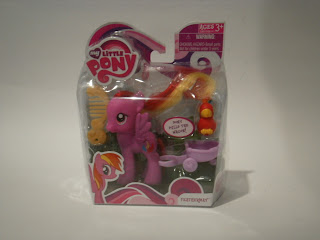 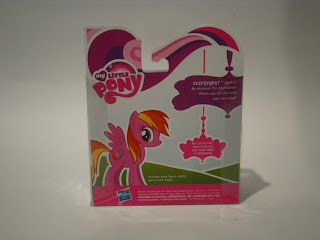 The packaging is similar, but this one is customised for Feathermay, of course.  The bubble on the front which takes up most of the real estate on the small card shows off all the contents, including the rainbow rooted hair, very well.  The back has a drawing of the pony and her bio... of sorts. 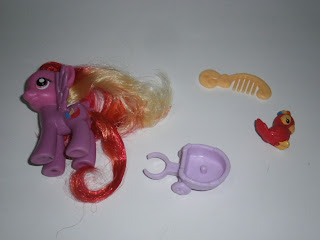 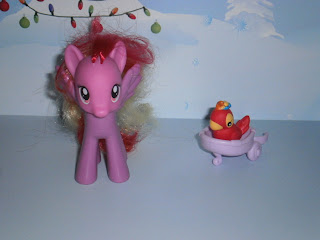 Feathermay comes with a cart, a parrot and a comb.  I have to say, three out of the four things are basically repaints of Rainbow Dash.  Only the parrot seems to be a completely new sculpt.  The parrot is cute but it's just a lump of plastic.  It plugs in securely to the cart and it looks pretty.  I like the tufts of orange, yellow and blue feathers on its head, but they could have at least got it to match with the rainbow colours of her pony.  The sculpt is good and the paint goes beyond "the line" but it's not very visible anyways. 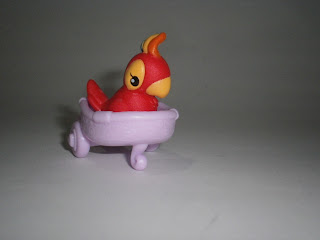 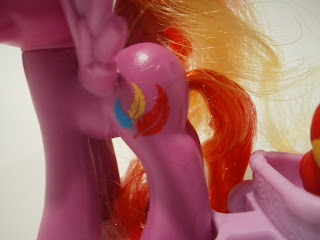 The pony is just a repaint with different coloured hair and different coloured plastic.  She has the same one point of articulation on her neck.  The only difference is the tampographed graphic on her rump which depicts three feathers in the primary colours of red, blue and yellow. 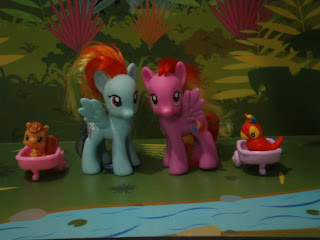 I have a sneaking suspicion that the reason why the ponies are so much of a success is because they have characteristics that imitate newborns - those big eyes and short stubby limbs and the primary colours.  I do wonder how many Bronies out there are indeed men with or hoping for little kids of their own...
Posted by Novelty at 23:22

Email ThisBlogThis!Share to TwitterShare to FacebookShare to Pinterest
Labels: Feathermay, My Little Pony