It's the start of February and February is usually a female month here on Toy a Day, at least for the past 2 years.  So this year will not be anything different.  And to tie in to the theme from January, here's Battleground Evil-Lyn, complete with her gitd staff! 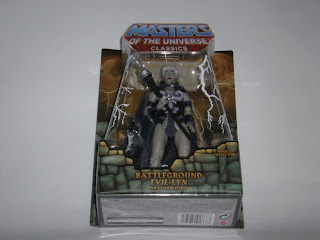 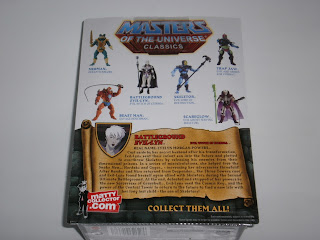 There isn't anything new about the packaging, which is good as it gives the line a consistent image throughout.  I like that she's holding her staff in her hand inside the packaging with the dagger and the non-gitd ball being on display.  The back of the card has one of her unhelmeted images in her bio shield, which is another nice touch. 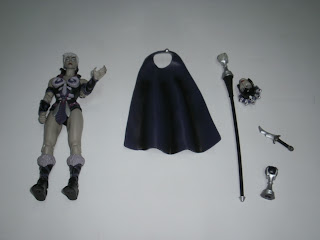 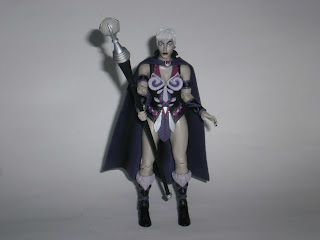 She comes with a removable cloak, her staff with interchangeable crystal balls, her dagger and her helmeted head.  She has a 'spell casting' hand so she can't hold both her dagger and her staff which is a waste.  They also missed out on an opportunity to allow her dagger to be worn in a holster around her leg or something. 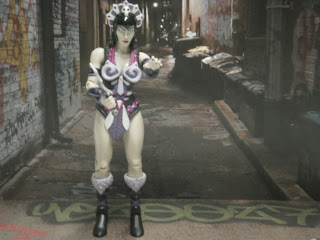 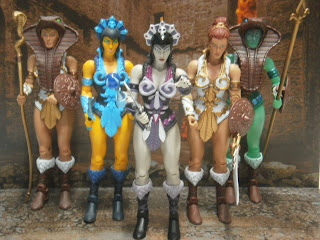 The figure is basically a repaint, with the body being reused from Teela.  This is the fourth incarnation of the body.  The only thing that's new sculpt-wise is the unhelmeted head, which looks great with the hyper anime hair. 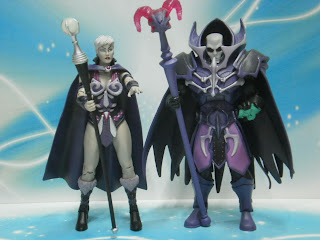 Evil-lyn looks good next to her father, but the costumes don't match.  They should have shrunk down the Faceless One's costume for Evil-Lyn, at least the front patches with the bone on the chest and the skirt flaps around the waist.  Still, this Evil Lyn isn't too bad, and it does give me a head for Sergeant Powers.
Posted by Novelty at 00:13