It's almost the end of the month, but I've still got a few Transformers up my sleeve to open.  Here's one from my favourite universe, TFA Grimlock! 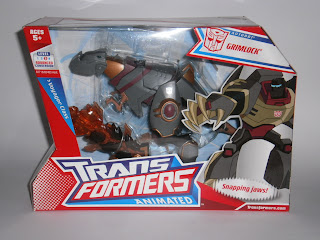 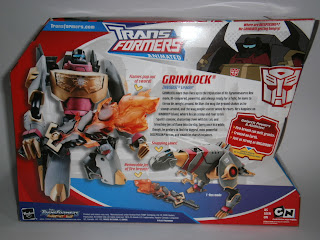 I still think the TFA box is one of the nicest.  Sure it's simple, but it does have a nice cartoony image of the character on the box and the alt mode visible through the window.  The back has a bio and both modes as well as the animated still.  It looks good overall. 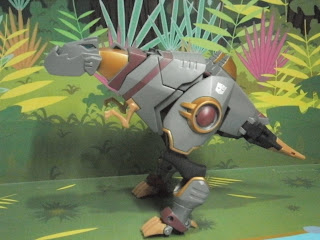 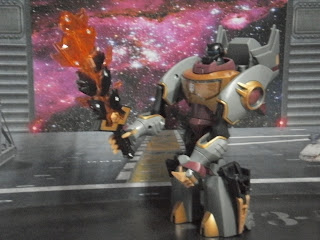 I have to say the dinosaur mode is a bit of a disappointment.  There is no neck articulation and the feet can bearely hold the figure up in an upright position.  The transformation to robot isn't too difficult.  I have all sorts of issues with the robot mode as well - the arms has a rather weird elbow joint, the head is extended way way way above the torso thanks to the weird neck piece and there's way too much kibble on the back.  Most of these are design flaws which can be easily modified to work.  I know, I know it's supposed to be in homage to G1, but this is the 2010s not the 1980s! 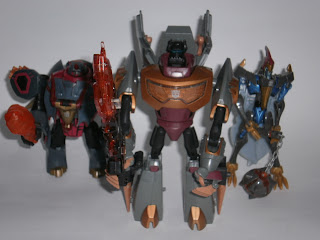 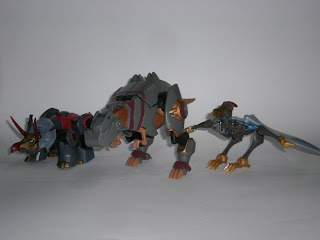 I dunno, I think in robot mode, he looks the worst of the three dinobots.  In dino mode, he fits in well... if onely he could stand up properly. 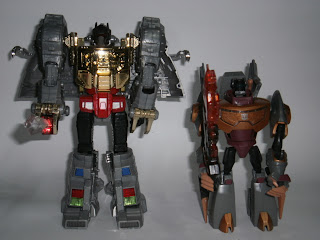 He's a poor shadow of himself when placed next to the Masterpiece.  Yes, I know Animated is supposed to be cartoony and cutey, but Grimlock is neither of those, nor does he look like the character in the toons.  He just looks like a huge big mess at the end of the day and that's due to poor design.
Posted by Novelty at 21:59