January is the traditional gitd month here on Toy a Day, and I thought I should continue the tradition with these two Spiderman figures to kick off the new year. 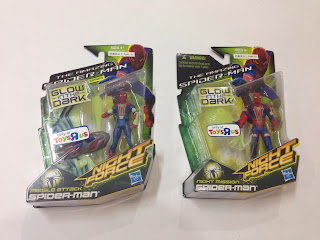 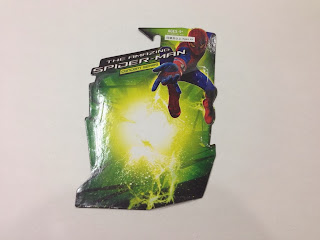 I got this pair of figures while visiting the Far East last year, and they are apparently TRU exclusives, hence the sticker on the front.  The packaging is interesting, with the radioactive green and the red and blue Spiderman clashing so fiercely, yet making so much sense. 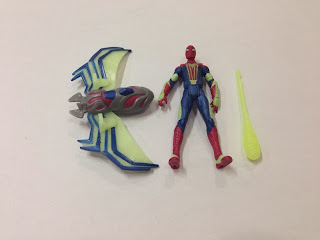 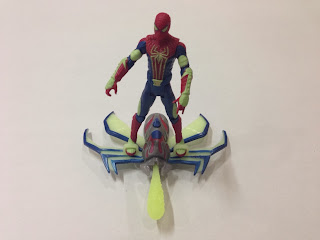 Missile Attack Spiderman comes with a huge moth that serves as his skate and a huge missile.  The moth has two points of articulation on the wings and stirrups to hold Spidey's feet.  The missile fits in its mouth and can be fired by depressing a button on its abdomen.  Spidey himself is nice paintwise, but the joints are very stiff and "lock" into fixed positions such that trying to pose him correctly isn't as easily done as it could have been. 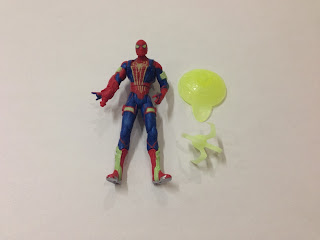 Night Mission Spiderman also comes with two pieces of accessories - a graple hook and a suction cup, and at first sight it seems rather skimpy. 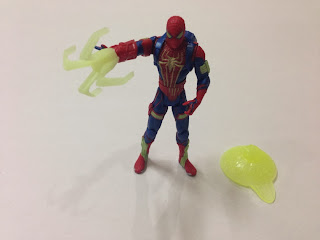 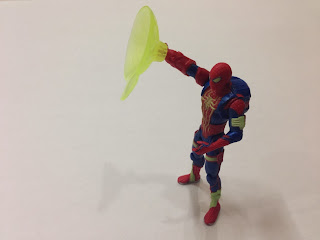 That's because he has a reel of string moulded into his right forearm with a peg at the end that attaches to either accessory.  The whole thing makes his hand looks deformed.  The figure suffer from the "locking": joints as well, so posing him is a problem.  He is very playable though, thanks to that auto-reeling string. 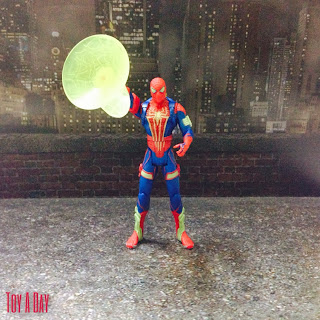 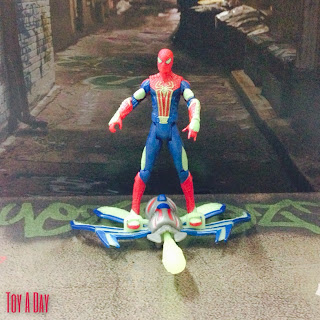 Overall, I like the gitd parts of the figure more than I like the actual figure itself.  The moth-skate is nice, but I'm not sure I'd like that ugly huge growth on the forearm of Night Mission Spiderman. 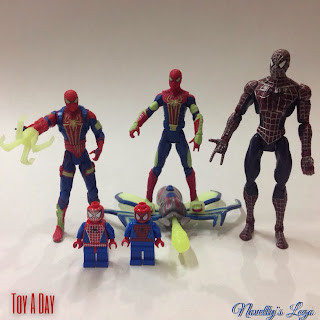 And just because I can, here are the two figures compared with a Spiderman 3 figure and two Spiderman Lego minifigures from different eras.  I guess each of the figures have their own plus and minus and these two figures does stand up, as a whole, to the figures that have come before.
Posted by Novelty at 01:51